Chiquita goes in and out of the paddock by herself now! 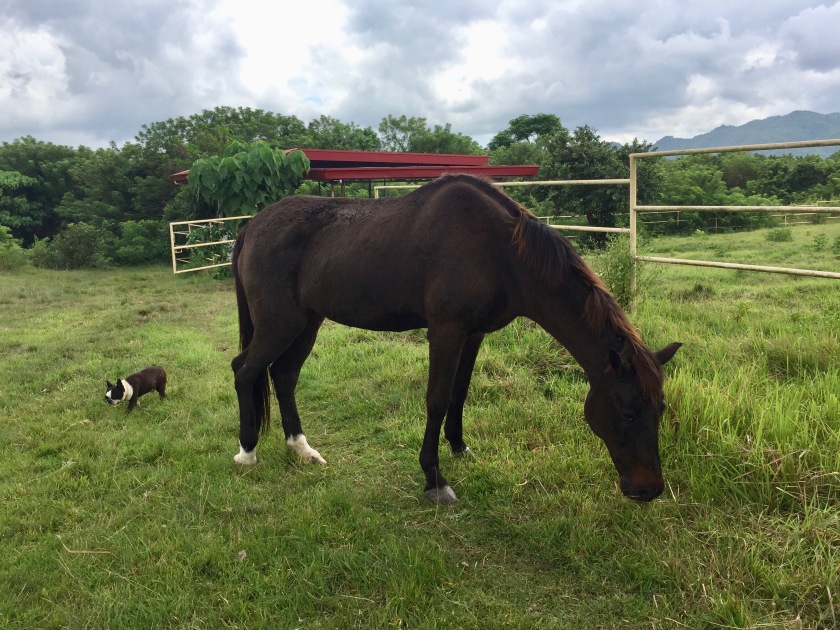 She even goes into the adjoining fields!

How We Did It

I really thought it would take a lot of intervention to get Chiquita to behave like a normal horse again. I was wrong! Sometimes, it’s great to be proven wrong!

The first step was to to stop bringing Chiquita cut grass. Our caretaker was worried that she wouldn’t have enough to eat if he didn’t bring her cut grass. He found out that if he brought her outside on a lead rope, she would graze for a bit. But he had to keep her on the rope because she would try to get back into the paddock. We figured that if we kept her outside, eventually she would realize that it was nice to walk around and graze! After a few days of monotonous rope-holding, he realized he could just shut the paddock door and take her off the lead rope!  Once she got used to being outside, the door was kept open during the daytime so she could freely go in and out of the paddock.

We didn’t want Takoy to be an only horse for too long. After a few weeks of searching, our friend Mikeli found a horse for us!

Chiquita is an old retired school pony from Manila Polo Club. She is very old and has medical issues. We were warned that she is sometimes grouchy around other horses. She had been confined to this stall for the longest time. The people who knew her were happy to hear that she was going to be retired in a farm!

I thought she would be very excited about having a lot of space for grazing and walking around. When she first got out of the trailer, she grabbed some clumps of grass and started walking really fast. Then she ran and even got away from Ruel! END_OF_DOCUMENT_TOKEN_TO_BE_REPLACED

Tippy passed away in September. He was 25, and that’s old for a horse. But still. He was eating well and didn’t seem to be sick. We buried him by a young Narra tree. You can look out to his grave from one corner of the paddock. Tippy was a very sweet and friendly horse. He is missed by all of us, especially his pasture buddy Takoy.

It’s great when it rains because that means we can plant trees and the ponds are filling up with water! We also end up stuck in the house, but that’s ok.

Things to Do When It’s Raining:

Sit around and sketch.