I was taking pictures of the Pied Harrier when I saw a smaller bird zip by. I snapped a few shots of the smaller bird. When I looked at the photos, I couldn’t tell what it was. I sent the pics to top birder Rob Hutchinson for ID. He said it was definitely a falcon but not a Peregrine or Kestrel. He said it was possibly an Amur Falcon or Northern Hobby, except that my photos were too far and blurry to confirm an ID!

I almost, maybe had a lifer at the refuge!

The next week while we were scanning the skies hoping to see the possible Amur Falcon or Northern Hobby, we saw a Brahminy Kite. Being the trigger-happy photographers we are, we snapped away at the Brahminy Kite.

At first it looked like it was flying with its legs dangling.

The following week, Tonji saw one of our neighbors. One of his chickens was missing! Our neighbor thought someone either stole it or set a trap for it. Tonji said that sure, maybe one of those trappers got it. That’s all he said.

Tonji was walking back to the cottage when he saw a mouse impaled on a tree branch. When he reached the cottage he told me about it and we went back out so he could show it to me. When we got to the tree it was gone. He said that it was probably a Long Tailed Shrike that impaled the mouse. It was watching him when he went to inspect it and maybe it moved it or ate it after he left.

I was disappointed that I wasn’t able to see the mouse, impaled through the eye and all. I didn’t think a Long Tailed Shrike could catch a mouse! Lizards and frogs, yes. But I was surprised that it could get a mammal! Our bird reference book the Kennedy guide says that Long Tailed Shrikes eat insects and small vertebrates. We also have Brown Shrikes and the book says that they eat large insects, small birds, and possibly mammals.

The following day I was clearing overhanging dead branches near the horse poop compost area and saw a mouse impaled on a tree branch! This one was long dead and eaten.

I believe that this is graphic confirmation that Shrikes can catch mice!

This week Tonji found half a crow in the grass. He was on the Day 2 of building Pond #7 when when he found a dead crow that looked like it was cut in half. He showed it to me, but I didn’t take pictures. The strange image stuck in our minds though. What could have done that to a crow. A crow! They are big, tough, and travel in groups called a murder of crows!

A few mornings later while Tonji was preparing our morning coffee, a Grass Owl flew in front the cottage. What a treat for us to see an owl in the morning.

Then a Pied Harrier flew into view. They were both probably hunting for mice!

Then Crows flew in and started chasing the Pied Harrier. They were very insistent.

And that’s the story of how Half Crow Pond got its name.

Some birds aren’t that scared of people and will hang out near the house. Like this cute little maya or Eurasian Tree Sparrow. And then there are crows. I confess that I used to sit around thinking of schemes to get rid of the crows. Crows have a bad reputation. They eat other birds. They steal eggs from nests. Other birds mob them and try to drive them away. They are associated with witches and bad omens.

They are also very intelligent birds. They are part of the corvid family. There are studies that show corvids using all kinds of tools, remembering the faces of researchers at a university and then attacking them when they saw them in the campus, and solving complicated problems such as dropping pebbles into a container of water so they can get a sip of water just like the Aesop’s fable!

Now that I’m not scared of them or trying to drive them away, I can just watch them.

There’s a murder of crows that hangs out at the horse house.

What would happen if Barkley entered the horse paddock? Would they attack Barkley?

They are no match for Barkley and just leave him to do his thing in the paddock.

I thought it was so nifty when I saw a crow drinking from the horses’ water trough. I ran back to the house so I could take a photo.

And then the other day I couldn’t believe my eyes. Was the crow really standing ON Takoy’s back?

Yes, he was! And Takoy wasn’t bothered at all! 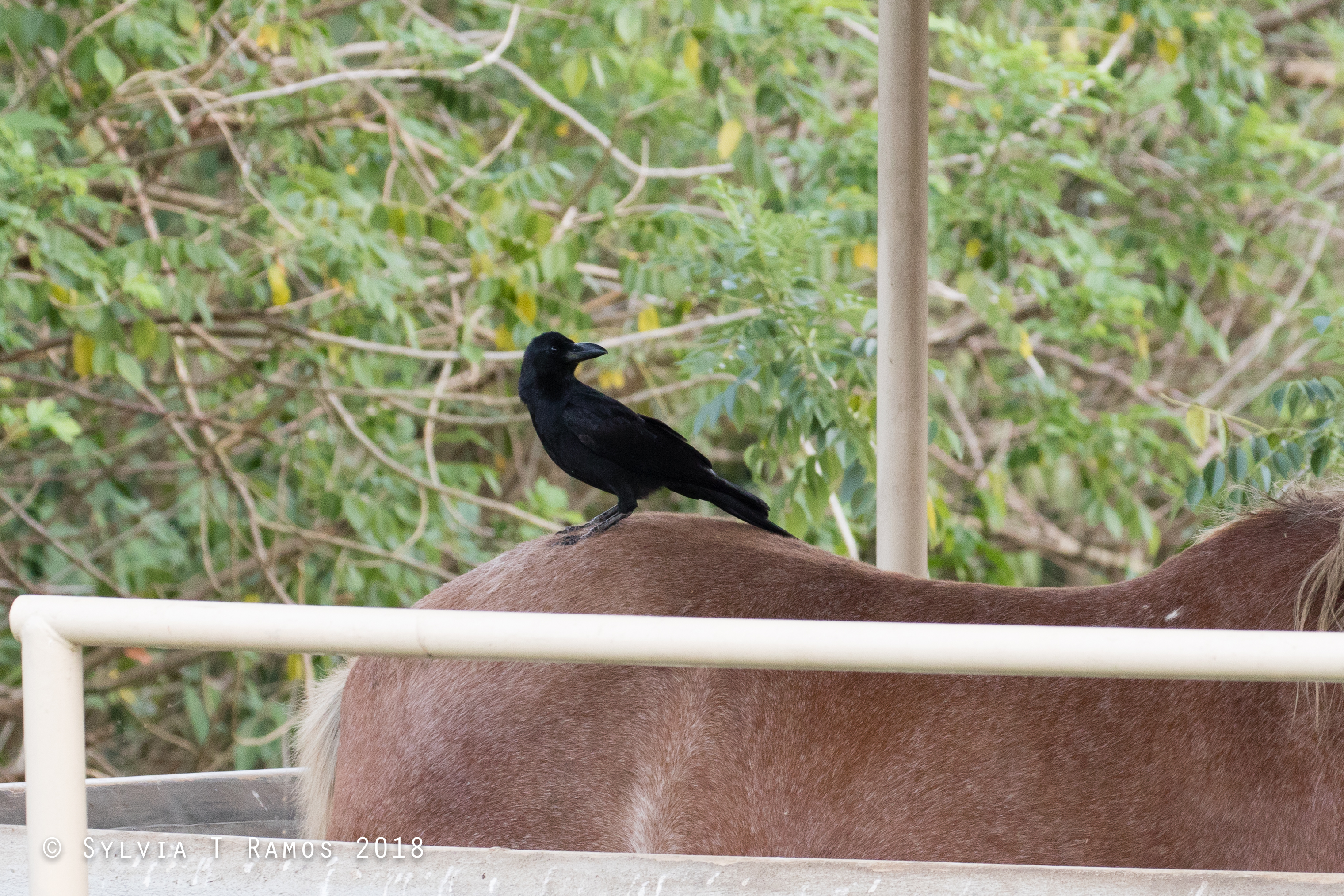 The crow stayed there for a long time. What was going on? Was he going to groom Takoy? Get a bug from Takoy’s back like those Oxpeckers and Rhinoceros in Africa? Walk behind Takoy waiting for him to unearth bugs from the grass like a Cattle Egret and carabao? Grab some feed from Takoy’s bucket? I didn’t see anything like that, the crow just flew away. But who knows what I’ll see next time! 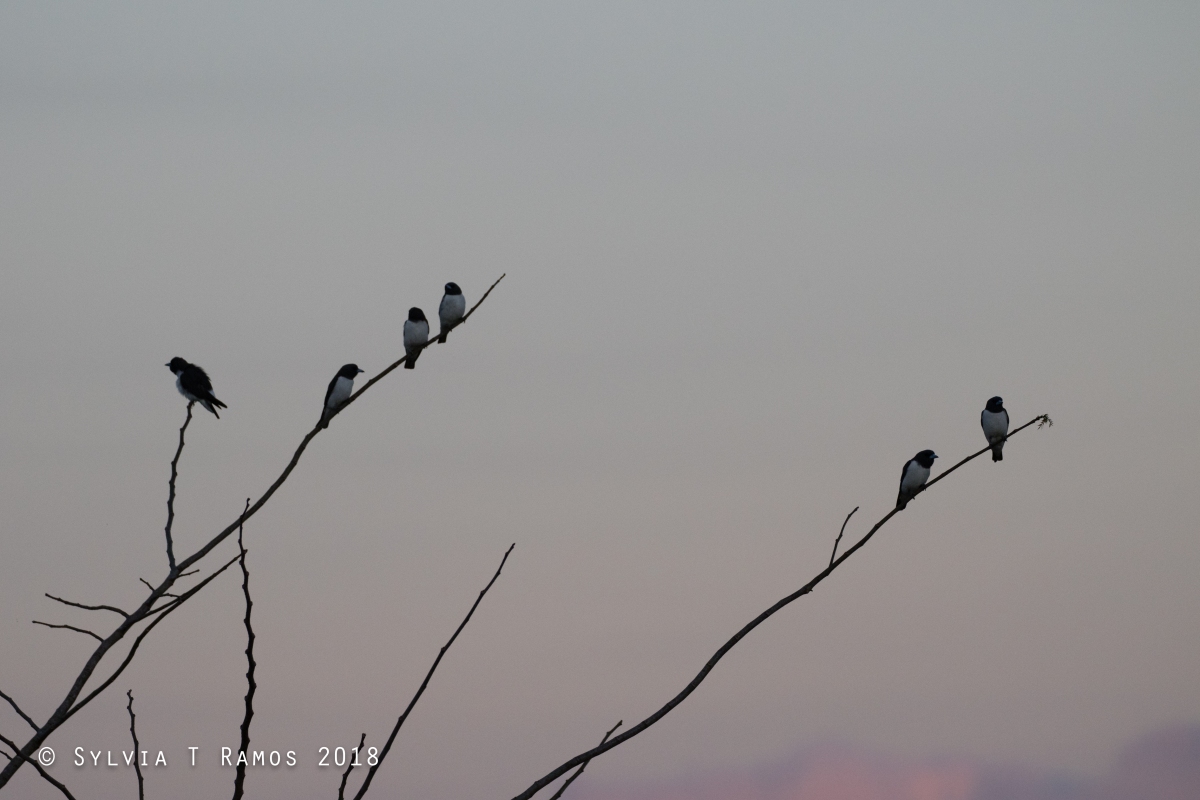 February has been a great month for hanging out at the sanctuary. The oppressive heat of summer is still a future concern. The ground is still nice, moist, and yielding. It only took Tonji nine days to dig up Pond Number 5. I was able to clear a big swathe of hagonoy in a new area using just my hori-hori hand knife. Momo and Barkley enjoyed  long morning walks through refreshing dew-covered grass, with stops every so often to admire the birds!

The Agohos are among the fastest growing of the trees we’ve planted. Their height makes them a popular perch of the orioles and crows.

Tali and  Laiya are still around. Will they stay through summer? Or are they migrants?

There are small flocks of Olive-Backed Sunbirds high in the Madre de Cacao flowers, Chestnut Munias in the grassy areas, and jewel toned Bee-eaters on low branches.

The Malabulak trees produced buds! Last year we saw only one bud that didn’t even become a flower. Tonji thinks next year will be a great year for the Malabulak.

The hot days of summer are fast approaching. All to soon it will be time to say goodbye to the cool weather and hello summer and summer projects!

Two very tough birds that don’t like each other.

One is big, black and eats other birds.
Large-billed Crow Corvus macrorhynchos END_OF_DOCUMENT_TOKEN_TO_BE_REPLACED