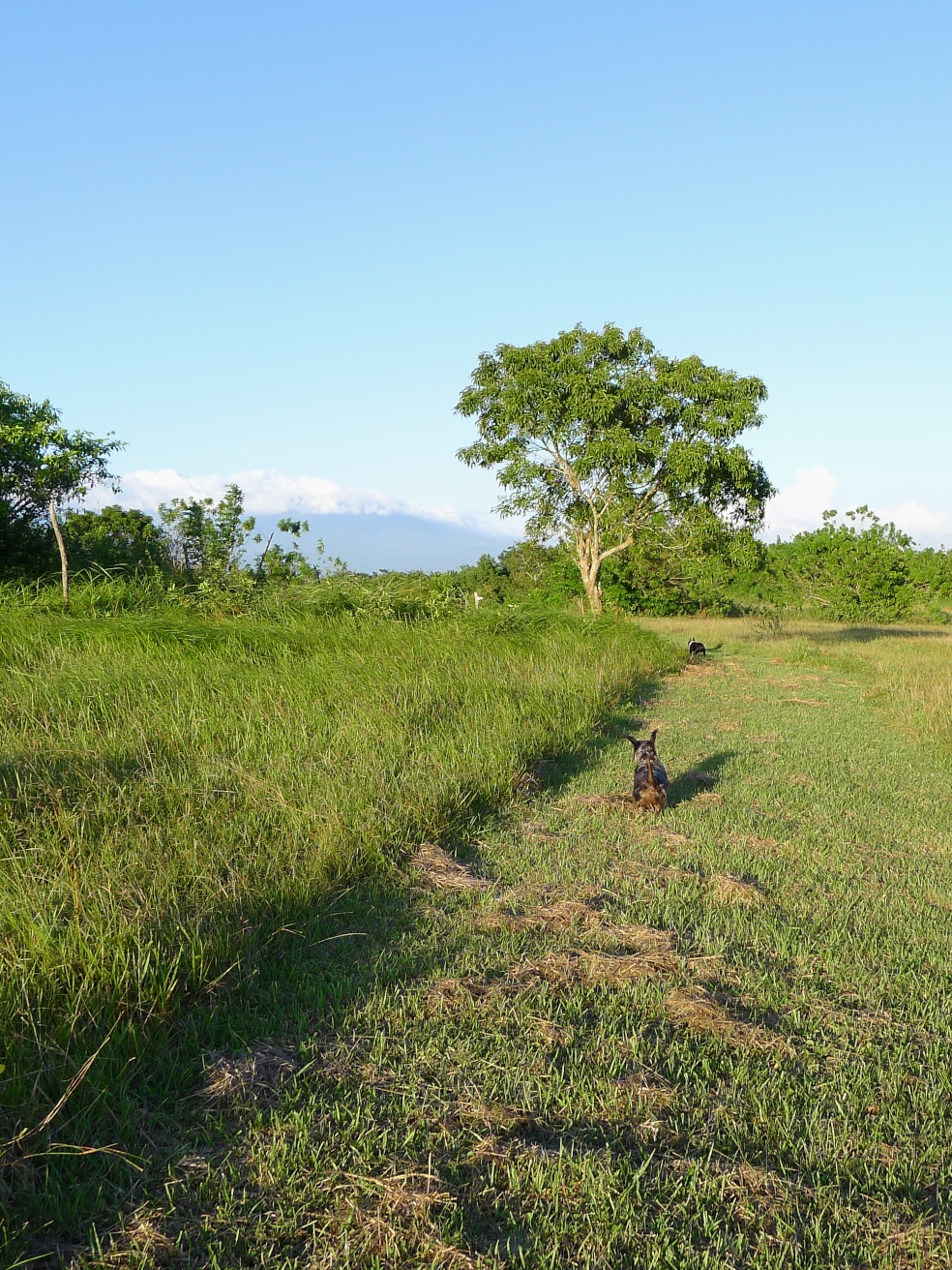 I really wanted the whole dogs on the farm idea to work. Momo and Barkley are great house dogs. They sleep in our room, love to play fetch and hide and seek, and they’re somewhat well-behaved during their daily afternoon walk.  When they’re off leash, Momo’s recall is pretty good. Barkley’s is just ok. But what would happen at the farm? On the plus side, I wouldn’t have to worry about them chasing other dogs, cars, cats, children, and other people. There are none! On the minus side, there aren’t any fences either. Still, I assured the husband that Momo and Barkley would make great farm dogs. They would be fine! We would all be fine! But just to make sure, I had our caretaker bag all the patties scattered on the farm from when the previous owners grazed cows and carabaos there.  I was sure the dogs would roll in them and try to eat them.

On our first trip to the farm with the dogs, I sat in the back seat with them to try to keep them calm. It didn’t really work. Momo barked at the toll booth operators and every so often Barkley would stiffen up and start shivering. Obviously, they hadn’t been on long car drives much. We arrived mid-morning  on a hot, sunny day with two keyed-up and adrenaline-filled dogs. As expected, they ran around with joy trying to mark and sniff every bush and plant in sight. To my great surprise, they ignored the sacks of cow poop! They just wanted to explore! Momo was more sensible than Barkley. After running around to explore, he would look for patches of shade where he could sit and rest. I carried around a 1 liter water bottle and drinking bowl and kept encouraging them to drink.

At one point, I lost my bearings and got separated from the husband, son, and caretaker. Momo and Barkley were with me. Then, Barkley ran off out of my sight into a patch of trees.  I called him, but he didn’t come running back. A few minutes passed, he still didn’t come back. Had he collapsed from heat exhaustion? I told Momo to wait for me under a tree and went out to look for Barkley. I was half-expecting to find him passed out. I found him running back and forth in some bushes. He was hot and the skin neck looked loose and baggy, a sign of dehydration. I carried him back to where I left Momo and poured water over him to cool him off. Whew, crisis averted. Later when we found the rest of the group, the husband just carried Barkley to keep him from running around.

Then there was the incident with the feral chickens.  That has been our scariest incident so far. A  farmer set up a bahay kubo (small native hut) in a field beside our farm. After a few months, he abandoned the hut and left behind his chickens who went semi wild. One day I was alone with the dogs when they suddenly noticed the chickens and gave chase! At first I found it funny. The chickens were fast and the grass was tall. I could see one chicken up a tree, one chicken hiding quietly in the grass, and  the dogs jumping straight up in the air in their attempt to find the chickens. Then it got scary when I couldn’t see the dogs anymore and had no idea where they were. I called and called for a long time. I expected Momo, the more obedient one to come running back. But to my surprise it was Barkley who returned! I carried Barkley back with me so I could find the caretaker to help me look for Momo.  The caretaker heard Momo give a little yelp. When Momo came back he had blood on his tongue. I don’t think it was chicken blood. I think he cut it on some plants. He was so wired though that he growled and barked at the caretaker. He looked so wiped out that I didn’t think he could walk back. I carried him to the car.

What was going on? Could these two really cut it as farm dogs? I didn’t want to have to keep them on leashes or behind fences. The next time we went to the farm, Momo was extremely well behaved. He followed close by me the whole time and stayed calm when we walked by three cows. Barkley had to be carried (again!) so he would stop barking at the cows. But at least he stopped barking at them. Progress!

We’ve had the farm for about six months now. It’s still early days for all of us. I like how now when Momo and Barkley see me getting ready to go somewhere, they pay close attention.  I really think they can tell when I’m in farm clothes vs going out clothes. When they see me pick up my farm boots, then they really know! They follow me around and their excitement grows and grows as they see me packing up their farm gear: water bottle, water bowl, towels, sheets for the car, leash, harness. They can’t wait to get into the car. Now they can ride in the back seat by themselves, sleeping or lying down until we’re at the farm. When we’re at the farm, they still run around and explore. Their pace is somewhat more controlled now, although sometimes the husband still picks up and carries Barkley when he looks too exhausted. Sometimes they roll in cow poop. Sometimes they ignore it.

They’re learning and I’m also learning what it takes to be great farm dogs!