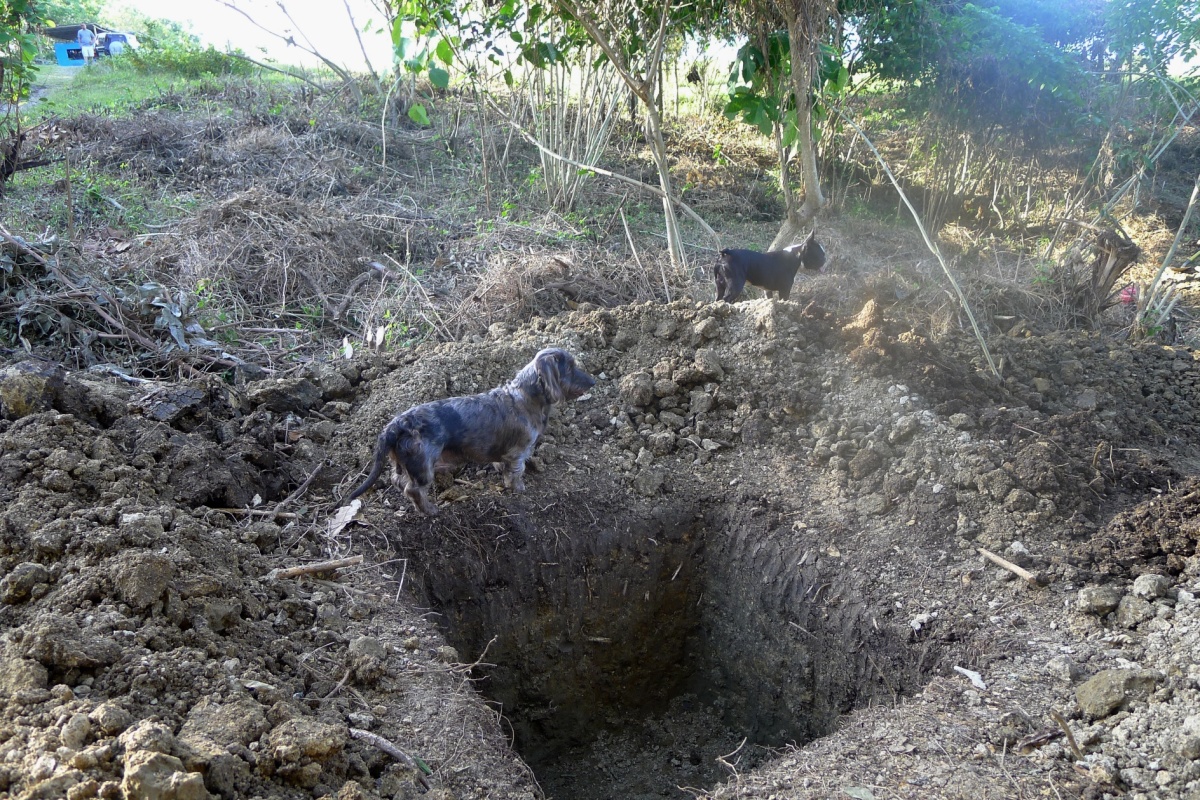 For our first attempt at tree planting at the farm, we chose a long strip of land right by our entrance that is flanked by a big field and a path on one long end and a dry stream bed on the other long end.  It seemed like a good idea to plant there since it is near our entrance we can check up on it often. Many of the before and after photos that I’ve seen of tree planting sites usually show a field with cogon grass in the before shot. We decided to plant where there were already trees so that we could improve the variety of trees growing there. As I mentioned in my post on charcoal, it looked like most of the big trees in the area had been cut down to make charcoal. From afar, the tree planting area looked nice and green. Up close however, it turned out to be a dense and impenetrable wall of weeds and shrubby Madre de Cacao  Gliciridia sepium.  Madre de Cacao is a fast-growing non-native shrub that was introduced by the Spaniards. It easily sprouts from cuttings.

The first step in tree planting is clearing the weeds. Even before we started reading up on tree planting, we already determined that the weeds growing under the Madre de Cacao should be removed. There just seemed to be too much of it and it didn’t even look like the birds liked it very much. Later on, I found out that it’s called Hagonoy  Chromolaena odorata and that it is an aggressive, invasive, fast-growing weed that threatens different ecosystems around the world. It has been called the perfect weed because can spread quickly and take over an area, killing off the native plants. Not only does it grow and reproduces quickly, it also isn’t eaten by animals because it is toxic. It’s easy to imagine how a pasture can quickly get overgrown by Hagonoy if the animals are allowed to over-graze and finish off all the edible plants. Soon, all that will be left is the Hagonoy!

Getting rid of  Hagonoy is very time-consuming and labor-intensive. It needs to be completely dug up or else it will easily grow back. It is also possible to burn it or use herbicides, but that would kill off all the other plants in the area as well.  Instead, we hired people to dig up the Hagonoy and leave everything else. Simply clearing the weeds made a big difference to the area! After the area was cleared, the workers pointed out 10 species of native trees growing inside the planting area that we had never seen before! It was reassuring to find out that there were other things growing there aside from weeds and Madre de Cacao.  I can see how if there is a healthy number of trees in the area, then just controlling the weeds and protecting the trees from being cut down might give enough of a boost for the trees to grow and later regenerate and restore an area.

Some of the species of trees that we found already growing were trees we bought based on our list of Framework Species for Batangas. We found the following trees:

The second step is preparing the planting holes. We decided to follow the advice of two experienced tree planters and prepare 1 meter by 1 meter planting holes. Some would say that this is overkill and only necessary if the subsoil is made of rock or adobe. However, we found that the soil in our tree planting are was quite hard and tough to dig. We’ve been told that the minimum area a tree needs to survive is 1 cubic meter. So if you prepare a hole of that size, then your tree is practically guaranteed to survive!

The third step is filling up the planting holes. We are using a mix of 2 parts soil, 1 part ipa or rice husk, and 1 part kusot or coconut coir. The kusot is made from ground coconut husk and helps keep the soil most and aerated.

The final step in tree planting is putting in the sapling and covering the ground with mulch to keep in the moisture and keep out the weeds. It’s also a good idea to put labels or tree tags so you can keep track of your new trees. We tried to plant the trees randomly so that they would look natural. We also tried to plant the trees that are usually found near water by the creek. Later on when I attended a seminar on native trees, I learned that dipterocarps like Dao Dracontomelon dao need a lot of water to grow well and should be planted close to a water source.

And then  the work of growing a tree begins! As I noted in From Farm to Forest, the area will need care and attention for the next two or three years. It will need to be weeded and the saplings may have to be watered. Then, according to Dr. Miyawaki at the magical point of 3 years the trees will be self-sustaining and no longer need any care!

3 thoughts on “Our First Tree Planting Site at the Farm”